The Hydrological Cycle
The water cycle, also known as the hydrological cycle, is the continuous exchange of water between land, water bodies, and the atmosphere.

Approximately 97% of the earth’s water is stored in the oceans, and only a fraction of the remaining portion is usable freshwater.

Routes of the Cycle
When precipitation falls over the land, it follows various routes. Some of it evaporates, returning to the atmosphere, some seeps into the ground, and the remainder becomes surface water, traveling to oceans and lakes by way of rivers and streams. 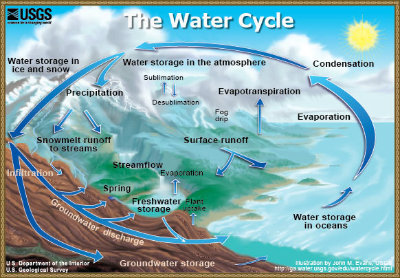 Impervious surfaces associated with urbanization alter the natural amount of water that takes each route.

The Consequences of Change
The consequences of this change are a decrease in the volume of water that percolates into the ground, and a resulting increase in volume and decrease in quality of surface water. These hydrological changes have significant implications for the quantity of fresh, clean water that is available for use by humans, fish, and wildlife.