Blue Springs Gets Its Name
Blue Springs’ history is tied to the migration of settlers on their westward journey. Pioneers found the area to be an ideal stopover due to the abundance of cool, clean water from a spring of the Little Blue River - hence the name Blue Springs.

The presence of water and a need for pioneer supplies led to the construction of a grist mill and permanent settlement at the site of the city’s Burrus Old Mill Park, on Woods Chapel Road. 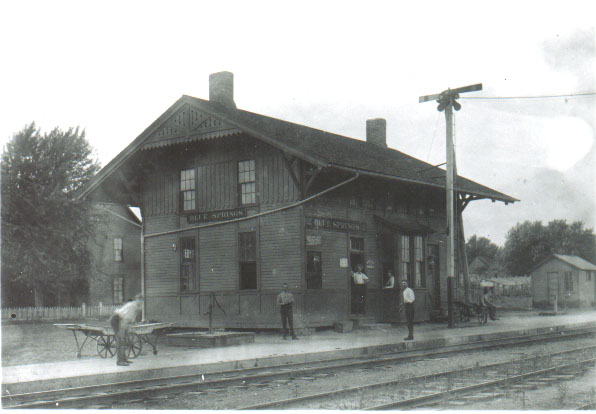 The Jackson County Court granted the incorporation of Blue Springs on September 7, 1880, making the city the 4th settlement in the county, predating Kansas City, Missouri. An early settler, Franklin Smith, arrived in Blue Springs from Virginia in 1838, and became a leading figure in the community’s development. He established the 1st post office in 1845, naming it after the well-known springs.

The settlement continued to grow near the springs until 1878, when the Chicago and Alton Railroad announced plans to build a station about one mile east of the original settlement. To take advantage of the commerce the railroad would bring, the town moved its center to the site of the new station and continued its development as a rural trading center.

The Blue Springs Historical Society is an all volunteer non-profit 501c3 organization formed in 1976. They are dedicated top reserving, promoting and fostering appreciation of the history of Blue Springs, Missouri.  For more information, click here.
Agenda
Center
Jobs
Pay
Bill or Ticket
Notify Me
Report a
Concern
Government Websites by CivicPlus®
[]