There are no set tee times so please be respectful to other golfers and those who may have arrived sooner. 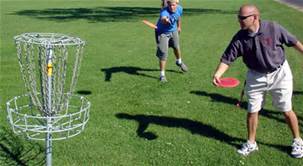 In the tabs you will find basic rules, score cards and the course map.

For the complete rules of disc golf, one can read the PDGA Official Rules and Regulations.

All players should always keep in mind that disc golf discs can potentially be very dangerous if not thrown with safety and common sense always in mind. Never throw a disc in the area someone occupies unless they are completely aware you are throwing it in their direction. Players should always wait until the player or group in front of them have completed a hole and moved out of the way until they throw. If you come upon a hole where the target is blind and you can potentially not see a group ahead it is common procedure to call out "clear on (number of hole you are on)". If there is no answer you should again call out and before throwing say "coming down on (number of hole you are on)".

The golf discs used today are much smaller and heavier than traditional flying discs, typically 8-9 inches (20–23 cm) in diameter and weighing between 120 and 180 grams. The PDGA prohibits discs heavier than 200 grams. Discs used for disc golf are designed and shaped for control, speed, and accuracy, while general-purpose flying discs, such as those used for playing guts or ultimate, have a more traditional shape, similar to a catch disc. There is a wide variety of discs used in disc golf and they are generally divided into three categories: putters, all-purpose mid-range discs, and drivers.

Putters are similar to the discs used in simple games of catch, such as the Wham-o brand Frisbee. They are designed to fly straight, predictably, and very slowly compared to mid-range discs and drivers. They are typically used for tight, controlled shots that are close to the basket, although some players use them for short drives where trees or other obstacles come into play. Usually a pro carries 1-7 putters depending on their flight characteristics.

Mid-range discs have slightly sharper edges that enable them to cut through the air better. These discs are usually faster, more stable, and have a longer range than a putter. Some players will use mid-ranges as drivers, and there are tournaments that require players to use only mid-range discs. They are good all-around discs and are suitable for a first time player.

Drivers are usually recognized by their sharp, bevelled edge and have most of their mass concentrated on the outer rim of the disc rather than distributed equally throughout. Drivers are often divided into different categories. For example, Innova Discs divides their discs into Distance Drivers and Fairway Drivers, with a fairway driver being somewhere between a distance driver and a mid-range disc. Discraft divides their drivers into 3 categories: Long Drivers, Extra Long Drivers, and Maximum Distance Drivers. Because the physics of a disc require "snap" or "flick", which means putting spin on the disc, new players generally find that throwing a distance driver accurately can be somewhat difficult and will require experience with golf disc response. This is why it is better for players to begin with fairway drivers, long drivers, or even mid-ranges, and incorporate maximum distance drivers as their strength and disc control increases. Most players that are starting off will be most likely throwing lighter discs. Another type of driver, used less frequently, is a roller. As the name indicates, it has an edge designed to roll rather than fly.

Spin (rotation) has little influence on lift and drag forces but it does impact a disc's stability during flight. Imagine a spinning top. A gentle nudge will knock it off its axis of rotation for a second but it will not topple over because spin adds gyroscopic stability. In much the same way, a flying disc resists rolling (flipping over) because spin adds gyroscopic stability. A flying disc will tend to maintain its spin rate even as it loses velocity. Toward the end of a disc's flight, when the spin and velocity lines cross, a flying disc will predictably begin to fade. The degree to which a disc will fade is dependent on its pitch angle and design.

There are a variety of different discs, each with a specific plastic made with them. Plastics such as DX, J-Pro, Pro-D, X-Line and R-Pro from Innova discs and Discraft are some of the less durable plastics, but good for beginners due to their lower prices, compared to the higher end plastics. Plastics such as Champion, Titanium, FLX, GStar, and Star plastics are the best offered from the same companies, offering the best quality, durability and flight compared to the other types available.

While there are many different grips and styles to throwing the disc, there are two basic throwing techniques, backhand and forehand (or sidearm). These two techniques are different and effective in different circumstances. Their understanding and mastery can greatly improve a players' game, and offer diverse options in maneuvering to the basket with greater efficacy. Many players use what is referred to as a run-up during their drive. This is practiced to build more forward disc momentum and distance. Throwing styles vary from player to player, and there is no standard throwing style.

To perform this throw, the disc is rapidly drawn from across the front of the body, and released towards a forward aimpoint. Due to the potential snap available with this technique, one can expect greater distance and accuracy than with its counterpart. It is important to initiate momentum from the feet and allow it to travel up the body, hips and shoulders, culminating in the transfer of energy to the disc.

The forehand (sidearm) throw is performed by drawing the disc from behind and partially across the front of the body: similar to a sidearm throw in baseball. The term sidearm actually predates the descriptor forehand, which is seemingly in use today as a simpler means to communicate the technique: equating to a tennis forehand.

The following examples of throws may be used to better deliver a disc where the former common two throws would be impeded by obstacles (bushes, trees, boulders, structures, etc.

The first incarnation of targets were known as tonal poles because of the sound they made when hit. These consisted of a metal pipe placed on a smaller pipe that when struck with the disc made a gong type sound. While these were much more accurate than a tree, arguments and disagreements led to the invention of the Disc Pole Hole by Ed Headrick in 1975. The basket (as it is now known in most circles) is the standard for disc golf courses.

The tee pad is where a player begins the hole. A solid base is a must for any successful course, and where early courses had plain dirt pads, modern courses use concrete, or more cost effective materials such as mulch, decomposed granite, or other natural materials. In recent years recycled rubber mats have been developed and are starting to catch on. While many alternatives have been created, concrete is the standard.

Signage is critical to any good course. Knowing distances, par count, out-of-bounds, and layout for each hole will give a player the information they need to make a great shot. Many courses have a main layout sign at the beginning of the course to show details of the course as a whole, as well as any needed information about the course. Hole signs give specific details about the hole the player is on, such as mandatory paths, out-of-bounds, and length. Not only are hole information signs critical, but way-finding signs and informational signs can make a good course great, and the absence of these can make a good course bad.

What makes disc golf unique is the utilization of natural elements, using trees and shrubs as obstacles and elevation changes to make the course challenging. Keeping the raw and environmentally conscious elements gives each course its own personality and strategy. You can find courses in many parks, with trees, creeks, gorges, tall grass, ponds, and many other obstacles found in state and local parks to make the course more challenging to play.

Safety is one of the most important elements of course design and actual play because most courses are in public parks: non-players are routinely found in the course environment. Paramount to the planning of a quality course is the detailing and minimizing possible points of interaction with non-players.

Because of all of these elements and the importance of each one to the success of the course, seeking out a qualified, experienced course designer will help to insure that all of these factors are kept at the forefront. Discs can be thrown fast and when hit, mainly the head, can cause serious injury. This is when it is the most crucial to call "fore!" to let others who cannot see know that you are ready to throw or that the disc is heading their way. This helps to prevent injuries by communicating to others on the park to be aware of discs flying toward them.[31]

Stroke Play is the most common scoring method used in the sport but there are many other forms. These include match play, skins, speed golf and captain's choice, which in disc golf is referred to as "doubles" (not to be confused with partner or team play).

Regardless of which form of play the participants choose, the main objectives of disc golf are conceptually the same as traditional golf in the sense that players follow the same scorekeeping technique.

Doubles play is a unique style of play that many local courses offer on a weekly basis. In this format, teams of two golfers are determined. Sometimes this is done by random draw, and other times it is a pro-am format. On the course, it is a "best-disc" scramble, meaning both players throw their tee shot; and then decide which lie they would like to play. Both players then play from the same lie, again choosing which lie is preferable. The World Amateur Doubles Format includes best shot, alternate shot, best score (players play singles and take the best result from the hole) and worst shot (both players must sink the putt). 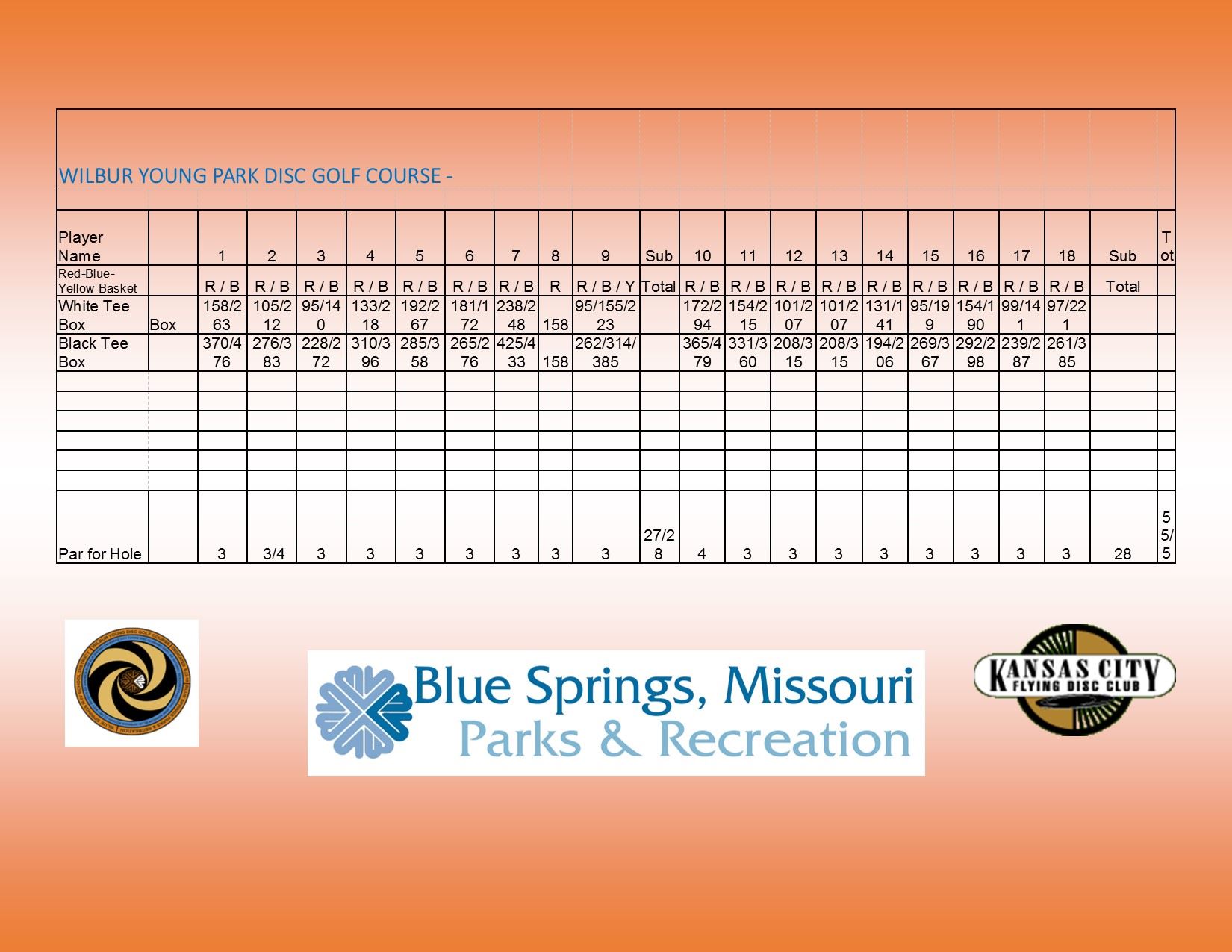